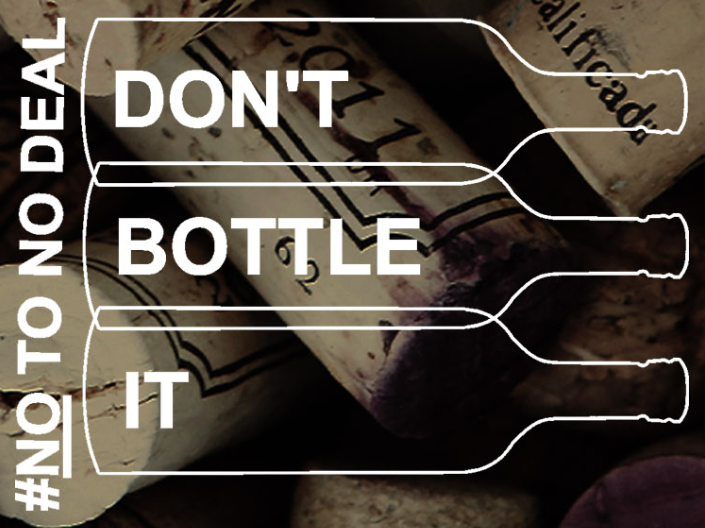 On the back of the Prime Minister’s call to “listen to business”, the Wine and Spirit Trade Association has today told Westminster “don’t bottle it” when the Government’s Brexit deal comes to Parliament, with the launch of its #NoToNoDeal campaign.

There are major concerns across the wine and spirit industry that we are still in danger of ending up with a disastrous ‘no deal’ Brexit.

Since the Referendum, the WSTA has campaigned consistently for a deal with the EU that delivers frictionless trade in goods, sufficient labour supply and a transition period that lasts until at least 2020. Before the end of a transition period, the UK must secure an ambitious free trade agreement with the EU which allows the UK to seek similarly ambitious trade deals with other parts of the world.

With continued membership of the EU off the table, the UK Parliament’s deliberations on the government’s proposed deal must deliver these outcomes, or the UK must go back to the negotiating table. But ‘no deal’ must explicitly be ruled out as the worst possible outcome – whether by design or by default.

For those businesses who have not formed – or been able to afford – a back-up plan for a ‘no deal’ Brexit, time has run out.

As part of the campaign, the WSTA is urging wine and spirit businesses to write to their MP, telling them that a ‘no deal’ Brexit scenario is unacceptable and that were the UK to leave the EU without a deal, their business would suffer as a result.

The WSTA has also launched www.dontbottleit.co.uk, which sets out exactly why passing a deal with the EU is so crucial to the prospects of the UK’s world leading wine and spirit industry.

The industry’s ties with the EU run deep – 55% of wine consumed in the UK is imported from the EU, whilst 45% of spirits exported from these shores is sent to the EU.

Crashing out of the EU with a no deal scenario would cause delays at the border, restrict movement of people, exacerbate significant cashflow challenges for businesses, especially SMEs, and create massive uncertainty for both businesses and consumers – an outcome the WSTA deems totally unacceptable and unnecessary.

“The UK wine and spirit industry is a world leading £50bn industry which does half of its trade with the EU.

With the launch of our ‘Don’t Bottle It’ campaign, our message to Parliament is that ‘no deal’ is totally unacceptable. It would fail to deliver what we have asked for consistently since the Referendum and there is now simply not enough time to prepare for a ‘no deal’ Brexit without causing serious damage to UK businesses. As we have said since the Referendum, the clock is ticking, and it has now all but run down.

“Despite the businesses we represent putting in place contingency measures as best they can, a ‘no deal’ Brexit presents a multitude of difficulties which are outside of their control. Leaving the EU without a deal would result in chaos and inflict painful damage on these businesses.

“We are calling on Parliament to ensure the UK does not leave the EU without a deal on 29 March 2019 – #NoToNoDeal.”