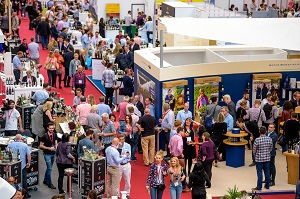 WSTA debate ~ Brexit and Beyond ~ at the London Wine Fair

The Wine and Spirit Trade Association is hosting a “Brexit” debate at this year’s London Wine Fair to help the industry fathom the future of its trading landscape.

Last year’s debate focused on how to minimise disruption leaving the European Union. A year on, and with the Government having failed to deliver Brexit, a panel of industry experts will once again offer their expertise on preparing for every scenario and for life after Brexit.

The headline issues being discussed will include the current state of the UK wine market, an update on the Brexit negotiations and how each outcome will impact for the UK wine sector.

Representing wine businesses from across the globe, the speakers will look ahead to the challenges and opportunities for the sector over the next 3-5 years, including potential pitfalls and golden opportunities.

WSTA Chief Executive, Miles Beale, will introduce and moderate the discussion and Q&A; “Brexit and Beyond”, which will take place at 10.30am on Monday, 20th May in the London Room at Olympia.

“Since the referendum result the WSTA has supported the Government’s aim to deliver a Brexit deal that works for business and consumers. In particular we have actively campaigned for an outcome that delivers a free flow of trade in wine and spirits. The WSTA has been frank in its view that a ‘no deal’ Brexit would be extremely bad news for the UK’s wine and spirit trade.

“Government and Parliament have both failed to generate a proposal that delivers Brexit. With political progress marooned on the backstop, it is imperative that UK politicians focus on developing our future trading arrangements with the EU. This matters a lot for the UK, whose wine market is unique in its position as global wine trading hub.

“The Government and this Parliament must do better. The lack of clarity in this and many other aspects of Brexit needs addressing fast. Failure to reach an agreement in Parliament means we will again be hurtling towards a disastrous ‘no deal’ outcome on October 31st – with much less chance of a reprieve. And, frankly, the timing could not be any worse for the wine trade, which will be on the verge of its busiest trading period. Wine businesses will want to be filling every inch of their warehouse space with Christmas stock for their consumers, not using it to stockpile in preparation for a no deal exit from the EU.

“And, of course, what we want to be doing is talking less about the costs and lost opportunities of negotiating Brexit and more about how to make the UK a more attractive market for wine and a better place to do business.

“The London Wine Fair is the perfect place and moment to debate the challenges and opportunities the industry faces; and will help industry to plan for Brexit and beyond.”

“The effects of the on-going Brexit negotiations on the U.K.’s wine trade have already been significant. Until only a few weeks ago, we were working towards a very different “post-Brexit” debate at the London Wine Fair, in which some semblance of clarity was expected. Next week’s session – the final in a trilogy of Brexit-focused discussions – remains essential for those seeking to navigate through these turbulent times.”

The two previous Brexit Debates were standing room only; to ensure your place for this year, please queue outside the Industry Briefing Room well in advance of the session.